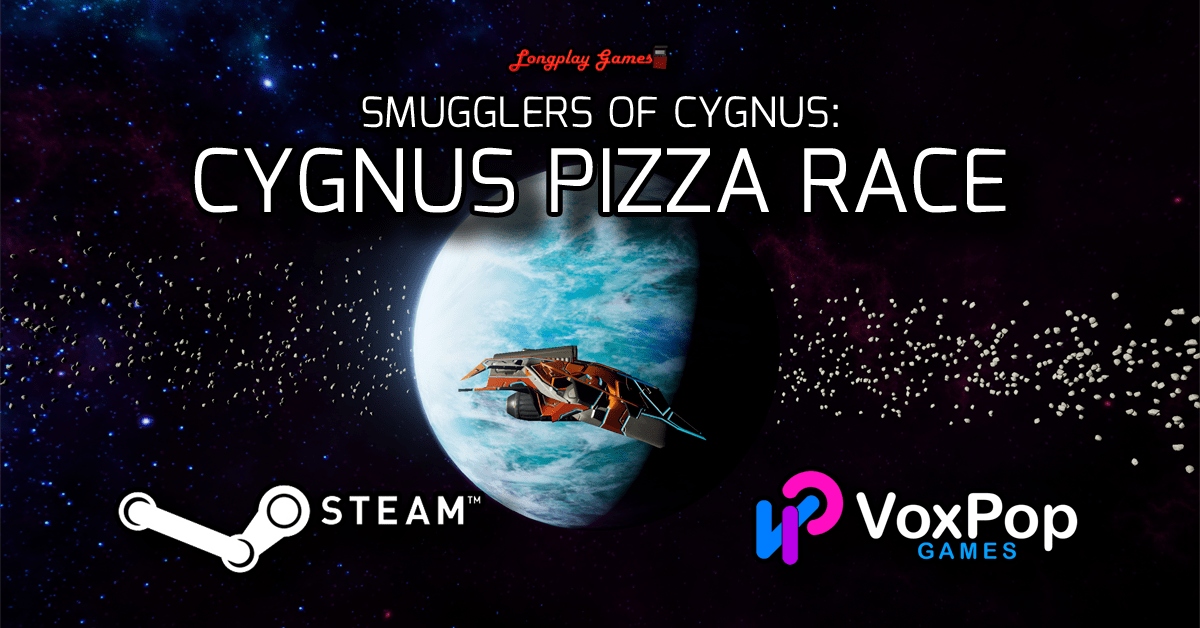 VoxPop Games is a Indie Gaming Platform that supports small Indie Developers by providing them a Platform that caters for the Indie Game Genre unlike platforms like Steam where the Game genres are vast and wide. The Team at VoxPop Games also has a dedicated Team of Streamers known as the Platform Streaming Partners, some who are also Sponsored Streaming Affiliates.

We will be talking about the Indie Developer Longplay Games and their published game Cygnus Pizza Race which has been on the VoxPop Games platform now as a fully developed game late 2020.

Who Are Longplay Games?

Longplay Games was founded in 2020 primarily focused as a science fiction game development and visual effects studio that is based in southern New Mexico, and is a spin off of the Indie Publishing Studio “Indie Imprint” that created “Get Your Ass to Mars” game that is also on the VoxPop Games Platform.

The development team behind Cygnus Pizza Race started originally on the 2018 “Get Your Ass to Mars” game and when the spin off Studio was created began work on the Smugglers of Cygnus Game which resulted in the mini game Cygnus Pizza Race.

Work began on the Mini Game Cygnus Pizza Race back in May 2020 being identified as an opportunity to help develop the Cygnus Galaxy game world with additional content which will be directly influenced by the mini game.

Work on Season 1 of Smugglers of Cygnus: Cygnus Pizza Race Season 1 is complete and the mini game was released on the VoxPop Games Platform as a “VP Exclusive” in June 2020.

The VoxPop Games Platform version of Cygnus Pizza race will have the new VoxStriker Ship which you will not be able to get on the Steam game version, this is a special “made for VoxPop Games” content only.

What is Smugglers of Cygnus: Cygnus Pizza Race?

Cygnus pizza race is a game that can be played both as a single player against AI and as a multiplayer game against a fellow human player and AI’s as well.

You can use both keyboard or a windows adaptable controller both wired or wireless, which gives you a great choice of control options whether you’re good with one and not the other, and even the same choice for your fellow human player, although it is advised that having two controllers works better as using one keyboard can get a bit cramped.

The game is beautifully designed using the Unreal Engine and has some awesome graphics to boot to go with this, you can tell a lot of time has been invested in making this game look eye catchy.

Controls in the game are smooth, so you can pretty quickly pick them up even if you fluff things up normally in games.

The aim of the game is to compete against other racers through out several levels of tracks with different types of race ships, picking up certain pizza toppings as you go a long to complete your pre determined pizza orders.

You can either focus on getting all the right toppings whilst taking your time, or you can be a speed freak and get the best time out of everyone but fluff a long way, the choice is entirely yours but one thing is guaranteed…you’re gonna have a lot of fun playing this game.

Not every race track is the same, they all offer something interesting to catch your eye, the unexpected tight turn or that lurching feeling when you go up and down on one of those awkward sloped bridges but the fun is there constantly and having to keep an eye where your driving…even if it’s going backwards.

Season 2 of Cygnus Pizza Race is due to be released in February 2021 on both VoxPop Games Platform and Steam, more games are planned for development and release that will be based on the Cygnus Galaxy world.

Updates will add additional content from new ships, tracks and content that will help you directly in the up coming Smugglers of Cygnus game due for launch in 2022, even more reason to get the Minigame Cygnus Pizza Race.

If you love Indie Games, love small Indie Developers, love space games, and games that give you that unexpected endless fun, then Cygnus Pizza race is that game.

There is plenty of thrills, fast paced racing, mistakes to be made, awkward turns and those moment when you will screw up and drop that one topping you’ve been trying to find through out the race.

You will not be disappointed about getting this game, I certainly was not, I even brought a second controller for my wife to use to play with me!

You can find the VoxPop Games version here, so download the client today and buy it! You can also help support me as one of the VoxPop Games Sponsored Streaming Affiliate partners by going to my VP Profile on the platform, to my recommended games and buying it as a “Reco” game. Doing this will support both the Indie Developer and myself as a VP Streamer.

With the Minigame only costing $3.99 on the VoxPop Games Platform currently, it really is a bargain of a game to get for everything it offers.