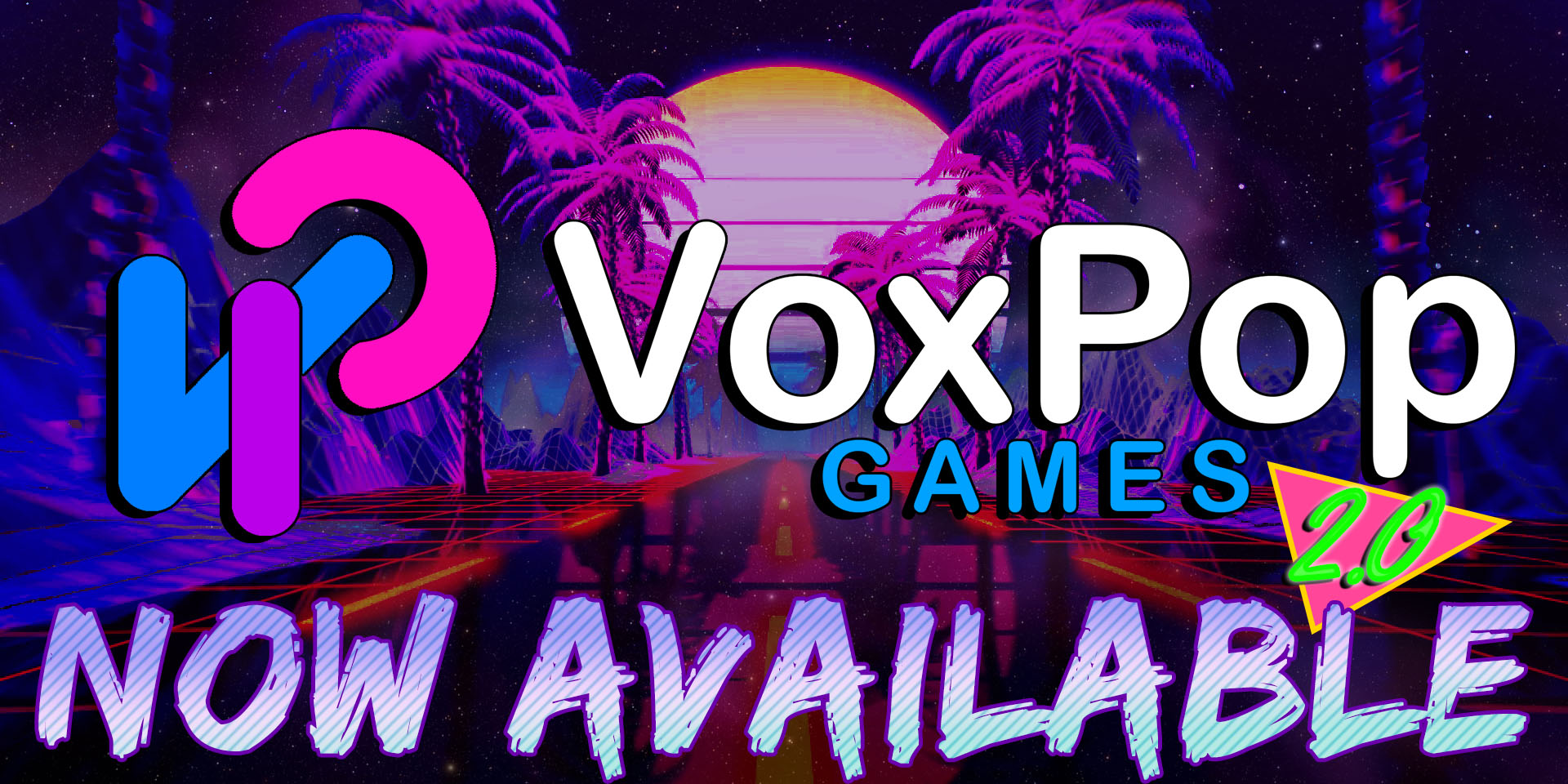 VoxPop Games comes with a host of features throughout the platform, these features are mostly VoxPop released features however some improvements or features have been requested by the community as a whole but behind this drive to improve the platform clients features are the indie developers and streamers.

Here we will be taking a closer look at one key feature on the VoxPop profiles in general and why it’s soo important both for VoxPop, streamers and developers, a long with how it positively effects stats on ones profile and why that is important.

What is a profile invite link?

Well lets be honest here, it’s pretty obvious…a invite link! This is used by developers or streamers as a timer on their stream or a custom command for people that may be interested in checking out a indie developers game or a game that a streamer is showcasing on behalf of VoxPop and the Developer partner.

However this link is key in driving traffic not only to the VoxPop platform client but to a streamers or developers profile and recommended games list.

This simple action potentially drives sales for the recommended indie games plus the current host of indie games on the platform, and with games being brought via the recommended games list both the developer and streamer get a share of the sale, resulting in two parties being supported.

The profiles host information about the streamer or developer depending on how much content they have added, within the profile features the profile owner can switch between a “Top 5” games from their recommended games list which will also sit at the top of the list and this itself is unique way to showcase current released games or for a streamer as an example a game they are currently streaming.

The main thing to always consider when using the profile invite link is that it’s main objective is to drive people to the platform and the potential of profiles recommended games list being viewed with the hope of a sale(s) being made so that primarily the developer makes a sale and profit, a long with the streamer being rewarded with a percentage share as a reward for supporting the developer(s) game(s) by showcasing them on their stream including to a wider audience: the twitch community.

What’s this about stats?

The stats are primarily important regarding the streamer(s) as VoxPop Games can see how well a said streamer is doing in promoting games and the developers, including how well a developers game may be peaking interest in the streamers viewers, the streamers main aim here is to generate viewership of the streamed game a long with creating potential interest, end of the day it’s a partnership between VoxPop Games, the indie developer(s) and the streamers where all three benefit from the invite link if used correctly and promoted accordingly.

Let’s just quickly take a look at the actual invite page when the link is clicked: The above image we can see a signup option to register a VoxPop Games account a long with a option to download the latest desktop client version, this is the first phase of getting new people involved with using the platform and checking out the library of fantastic indie games currently available.

The second phase is getting people to signup and download the  client, without this step users can not buy or play the game they are wanting to check out, the signup link takes you to a simple registration pop up window to fill out some basic details like any other registration form.

The main feature here is the “Enter the ID of the person who recommended you” part, this is automatically filled, as you can see you can see my profile user identification 167 in there, once someone signs up this signup stat is automatically assigned to my profile to give me a indication of if someone has actually signed up to VoxPop Games via my invite link and the number indication gives both myself and VoxPop an idea of how well I am doing (don’t judge me on the 2nd image…a lot has changed since)

Let’s not also forget that in the image above we can also see my current “Top 5” recommended games which I tend to switch when I am due to stream a developers game or there’s some hype going around a particular game. 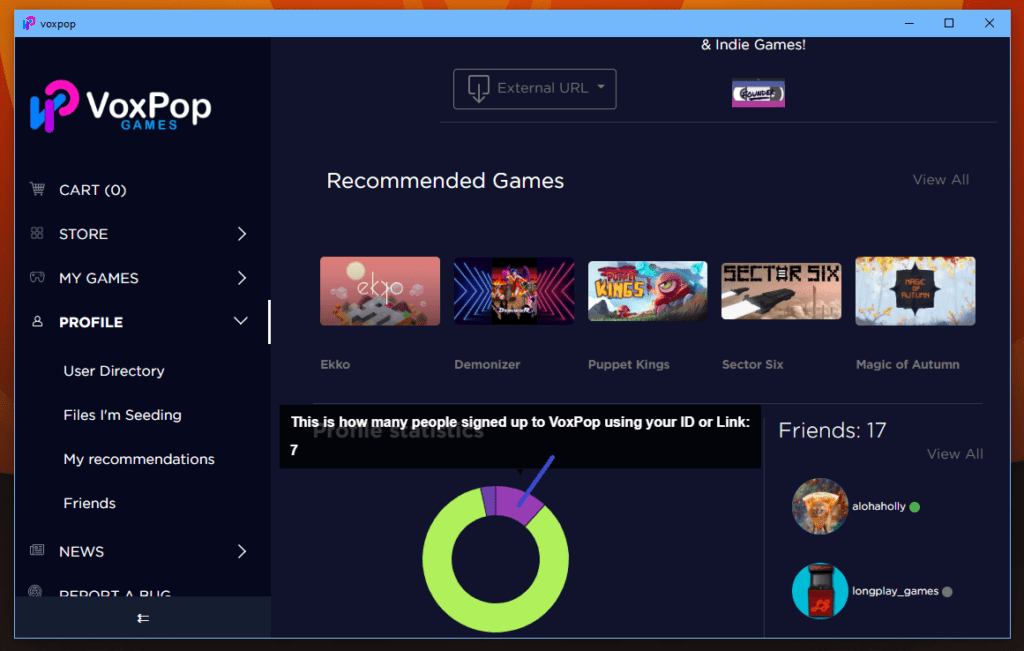 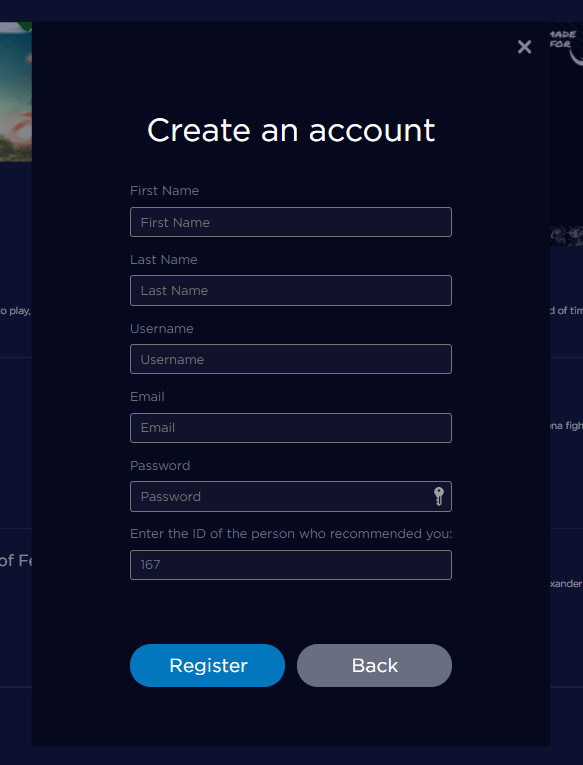 We also have stats showing how many people have viewed a profile a long with how many people have brought games through that profiles recommended games list. This is one reason why it’s so important not just for myself but other VoxPop partner streamers to really promote our profile invite links as this is the first step in getting people interested in the VoxPop Games platform client, the games available and to help promote sales of the developers games. 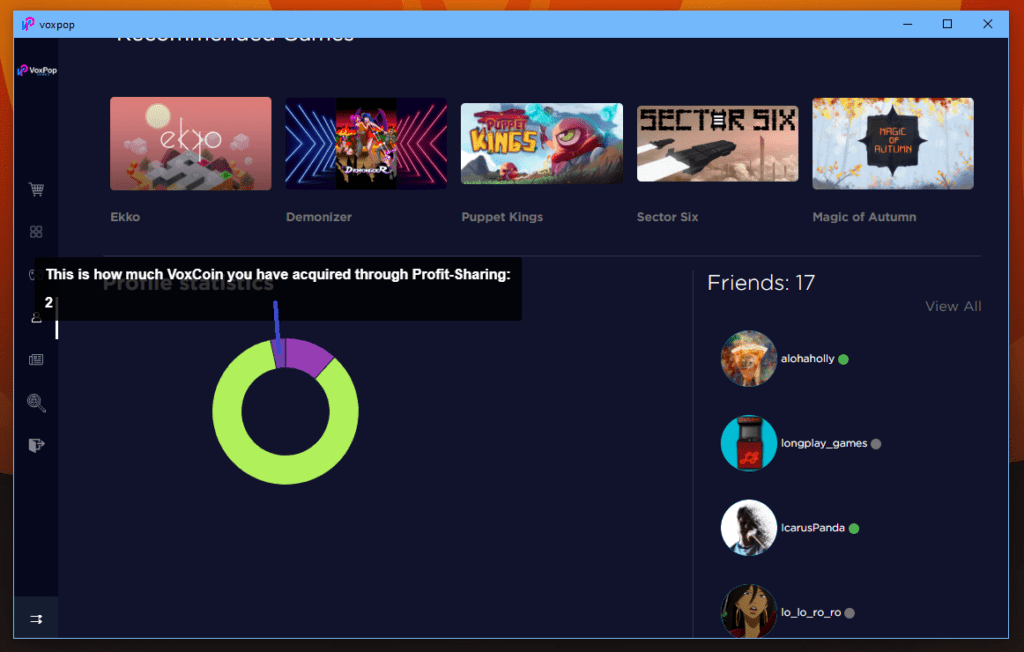 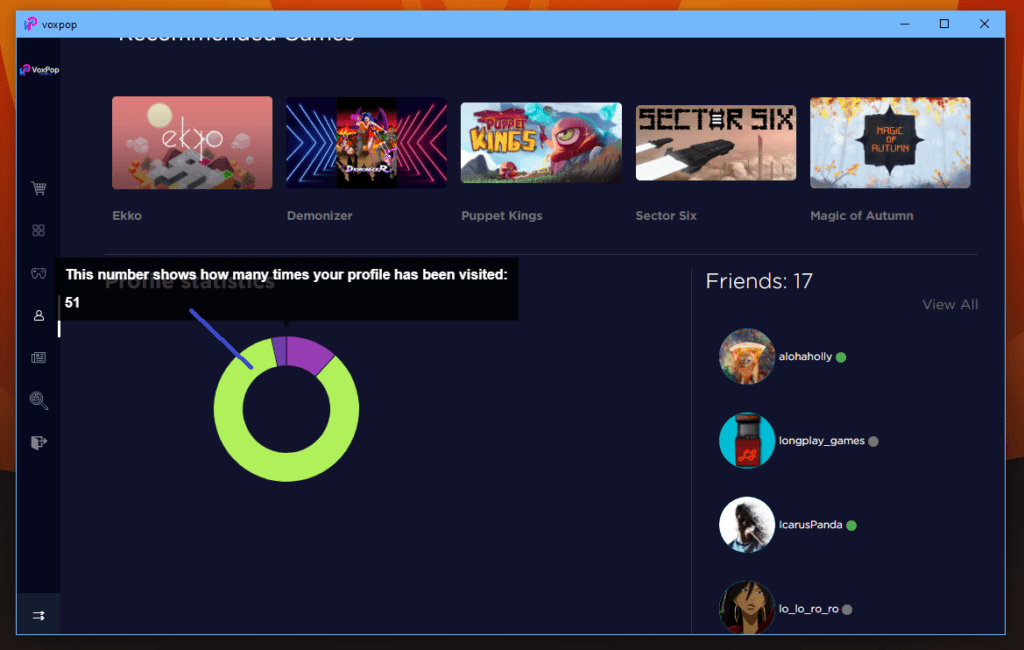 Overall the profile invite link isn’t any ordinary link to just drive people to said persons VoxPop Games profile, its a promotion tool to help the indie developers get their games showcased through alternative media promotion and reach new audiences that normally a small indie developer would not have access to.

Small indie developers do not have big budgets to pay for paid promotion like some really big indie publishers / developers may have, other platforms like steam cater for many genres of games so the indie developer(s) game(s) may get lost amongst the many games on those platforms, and this is where VoxPop Games and it’s unique partnerships with indie developers and streamers really shines.

A platform just for indie games and their developers, supported by a community and streamers who share a passion for indie gaming, this is VoxPop Games, you’ve just been VoxPoped!